It was high noon when we finally spread our blanket on the familiar shore of “our” secluded cove near Makena Beach. It was two days before our re-commitment ceremony in Maui. At my insistence, we had driven to two other beaches that morning. Our two-week vacation in Hawaii was almost over and I was trying to squeeze in something different. Bill and I spent almost every day at this cove snorkeling with sea turtles and sharing amazing underwater explorations. Today I thought a change in scenery would make me feel better; I had been in a ‘funk’ the entire trip. One site we visited was too dangerous to swim in and the other one felt dull and unexciting. “Icky” was my reaction to black sand—the black sandy beach I insisted we see before leaving the island. It became clear we had to return to our cove and I needed to stop feeling sorry for myself. I admired my husband’s patience.

On the plane ride to Hawaii, a thought occurred to me. I heard it a little louder each day: “Something special is going to happen in Maui.” I kept dismissing it as imagination. When I broke my pinky toe two days before on this special beach, I chuckled at the irony through my tears. “So this is it?” It was May 1999. Last month I lost a best friend of almost 48 years, my paternal grandma, Mary (Maria) Bello. Two months before that, our only child was married—with our first grandchild soon to arrive. We were celebrating a wedding and vacation with our son and his new wife. I should have been grateful but I was feeling a deep dark depression constricting my soul. Sitting down facing the water, rubbing my bruised toe, I spotted dolphins jumping in the distance near a fishing boat. “Billy, Billy, look, look!” I pointed. He jumped up and ran to the water, throwing on his snorkeling gear in the process. I hobbled down to the sea, not wanting to be left alone, a mass of mixed emotions. As soon as I began putting my fins on in the water, I started feeling better, the pain in my toe subsided. With each stroke into the surf my heart pounded a little harder, the sea was charged with positive energy. Soon I was giggling and screeching dolphin noises, calling to them: “Come and play dolphins; come and play with me!”

After a long swim and a short pause to catch my breath, I assessed my distance from the shore. Well over 500 feet away, I felt a little frightened. Seeing Bill nearby, I relaxed and went underwater again. To my amazement, I saw a smiling face looking me in the eyes. Turning my head in each direction, I saw about 20 more smiles—smiling spinner dolphins urging me to play with them! I popped up and signaled to my husband to look down! He was scanning the surface for dolphins, assessing his distance to their fins. For what seemed an eternity, I forgot all issues and lost my mind in a sea of bliss.

We swam with this pod of over 40 dolphins two times that afternoon. At first, I was amazed at how fast I was swimming, but later realized they were pulling me in their current! Without our knowledge, they were jumping and spinning in the air above us. According to the only two witnesses, the dolphins gave them quite a show! Enraptured, we couldn’t wipe the ecstatic smiles off our face. We thought we died and went to heaven.

The excitement was infectious. One witness paddled out to watch from his surfboard while his girlfriend stood open-mouthed watching from the shore. All four of us were enthralled. They left me in dazed excitement. My intuition was right! Something special had happened in Maui and it was just beginning… Near sunset I spotted them again returning for more fun! Having lost one fin in the last adventure, I hobbled after my husband in an almost identical instant replay. 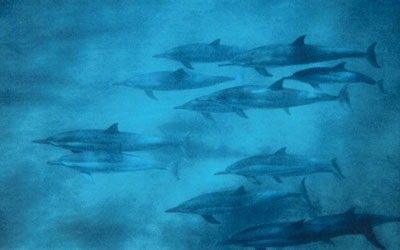 This time the salty ocean embraced my broken toe instead of hard rubber.

In this second dolphin encounter a mother with calf close beside her glided next to me—baby nearly brushing against my skin! My heart swelled with loving gratitude that flowed through my arms and outstretched fingers, inches from her nose. I felt her love me back.

Guiding my hand she led me in circles. Swept in a field of mysteriously charged energy, enveloped in this wondrous trinity, I felt the bliss of infinity as we circled in figure eights under the sea. I do not recall when they smiled their last goodbye and left us high on their love. We slowly swam to shore as the sun set, enchanted. Packing up our gear we shared the adventure with one lone witness, a fisherman, and then with every shopkeeper and person we met on the way home. We were bubbling over with excitement; all responses were like the fisherman’s: “I’ve never heard any tourist tale like this before!” or “You’re crazy! There are sharks in those waters!” We savored our joy and our ignorance, understanding later that the dolphins had kept us safe, leaving us exactly where they found us, in perfect alignment with our blanket on the beach! They had been guiding us back and forth parallel to the shore–although we would have followed them anywhere!

They weren’t like the sea turtles who tried to lose us in deep ocean waters during much slower swimming adventures that week.

Two months later, mother dolphin re-visited me in an EMDR session. When my therapist suggested I call on my higher power to rescue me from a traumatic memory, Mama appeared, took her tail and whacked my abuser into outer space, freeing me from a paralyzing terror. I was guided to ask her name and heard a dolphin-sounding screech, “sheee-ooo-meee.” When I asked her how to spell it, I saw “s-h-i-o-m-e” in my mind’s eye.

My therapist is psychic. She told me it was a Japanese word, and this was my dolphin from Maui! I didn’t believe it, insisting it was my imagination and meant ‘she ‘o me’, my Higher Power. “That may be true,” my therapist affirmed, “but it’s definitely your dolphin from Maui. Look at the spelling!” It took me two years to check it on the Internet, at her encouragement. Having named my work ‘Shiome Therapy’, I finally agreed it was wise not to infringe on anyone’s possible copyright. After typing “Shiome” on the computer and hitting “search,” I waited. Goose bumps crept all over my skin as I read on the screen:
“Ocean Dictionary, Japanese to English Translation.”

Scrolling down from A to S, I viewed the definition:
“SHIOME [ 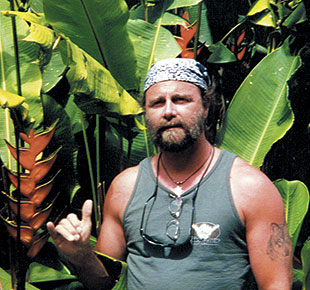 Dropping to my knees, crying, humbled, I begged forgiveness. I promised to never again act so flippant. I had ignored my inner voice and refused to believe the truth. I promised to never again let that happen. I promised to honor my intuition and honor the magic that happened in Maui—the true and powerful love of Shiome! I remain in awe. It is with the deepest respect I share this story with you now. People may find it hard to believe, as I myself once did. Interestingly, Bill bought a disposable underwater camera that special morning in my search for a better beach. It seems somehow we are guided to the things we really need when searching, and I believe our souls are always searching for something special…

“As you save the world, remember all the people in it. If you see everyone—if you believe that we are because others are—if you serve in that spirit—your grandchildren will be here 50 years from now. And it will be even better, because you will have fulfilled humanity’s first obligation: to honor what is holy about it, and to pass it on.”

“The one with the most Awareness has the most responsibility.”